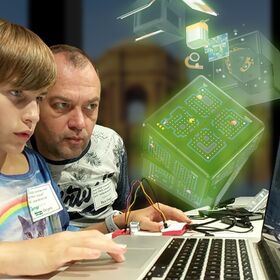 Ilya Osipov is a Russian-American computer scientist, entrepreneur, and inventor. When he was a student, he took part in a national computer-science competition in 1996 and even got first place in programming. He is the author of 18 scientific publications on the topic of human-computer interactions and holds 4 patents.

As for the professional experience, he is well known as a founder and owner of one of the largest websites in Russian, NN.RU, which he later sold to the Hearst Corporation. He was also the co-founder, investor, mentor, and manager of several startup projects such as Numbuster, FedSP.com, etc.

As a hobby, he designs mechanical puzzles and you can even buy some of them in stores. He has received several nominations and awards as the World technology award’2018 for the WOWCube® system, Nob Yoshigahara puzzle design competition’2018 Auzzle A2 puzzle and in 2020 WOWCube® system became the prestigious Edison Award’s winner.

He relocated with his family to the USA in 2013. He lives in Novato, California with his wife and two children. In 2016, together with his son Savva they invented the WOWCube® Game System and he founded Cubios Inc. to develop his invention.